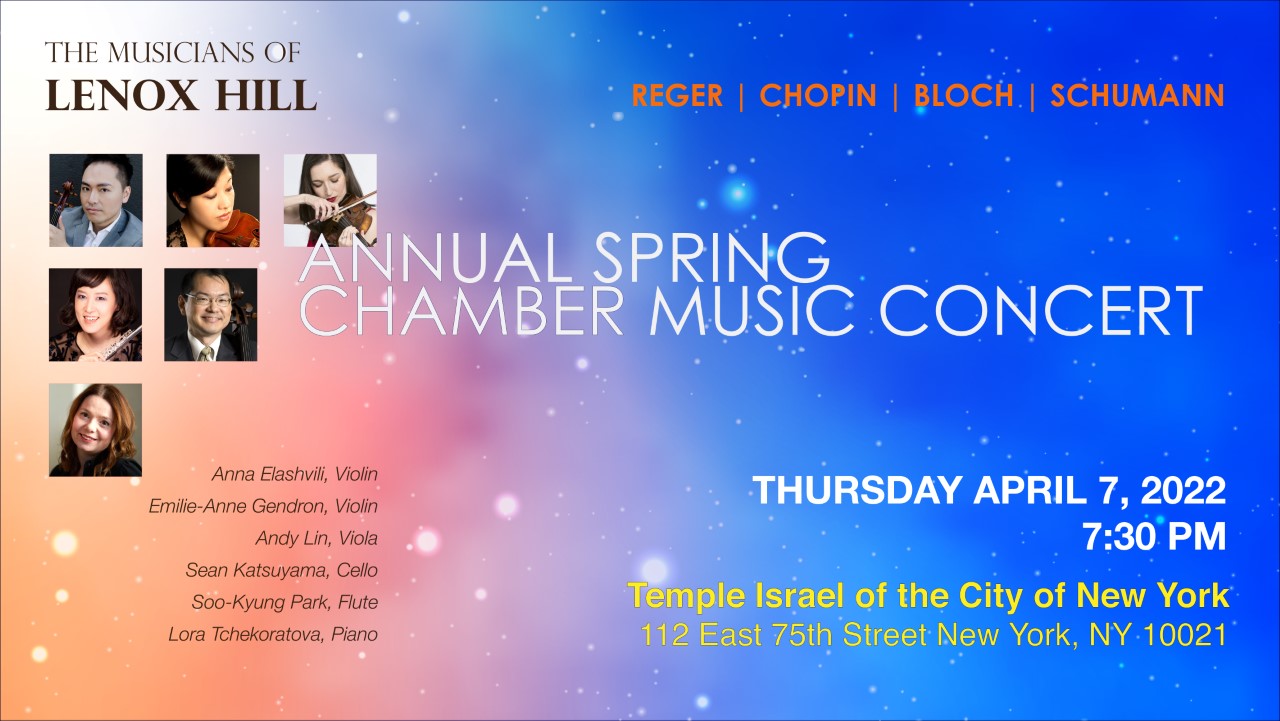 We are thrilled to be presenting our annual chamber music concert in-person this year on Thursday, April 7, 2022, at 7:30 pm at the Temple Israel of New York City. Our program features works by Reger, Chopin, Bloch, and Schumann.

Please join us for a night of wonderful chamber music. This event is free and open to the public, with free-will donations accepted.

This program commemorates the lives of Dr. Hyman Levy and Jerrold Levy, and their love of music.

Dr. Hyman Levy was a renowned and beloved cardiologist, scientist, and teacher at Mount Sinai Hospitals, and incorporated his kind spirit and hard-working attitude in everything he did. In addition to his gifts in medicine, Dr. Levy had a passion for the arts and was an avid member of the music community as well as a violinist. He often gathered his colleagues to play chamber music at the hospital, and now his collection of selected chamber music has generously been donated to the Musicians of Lenox Hill. His late son, Jerrold Levy, was a flutist and enjoyed playing the instrument throughout his life. Jerrold especially loved spending time at the Hebrew School of Temple Israel as well as in services. Dr. Levy’s contributions to his community through medicine, research and music will always be cherished.

Hailed by the New York Concert Review as “exemplary throughout” and “extremely impressive, technically and musically”, the Musicians of Lenox Hill ensemble is composed of a unique combination of flute, violin, viola, cello, and piano, which allows the musicians to explore a vast range of classical, romantic and contemporary literature and imaginative programming. This year’s musicians– Soo-Kyung Park (flute), Emilie-Anne Gendron and Anna Elashivili (violins), Wei-Yang Andy Lin (viola), Sean Katsuyama (cello), and Lora Tchekoratova (piano)– have multifaceted international solo, chamber music, and teaching careers, have won many of the world’s most prestigious music competitions, and regularly perform with leading major ensembles. All Juilliard alumni, they hold faculty positions at world-renowned institutions and summer festivals, have produced critically acclaimed albums with prominent record labels, and are deeply committed to mentoring the next generation of young artists. 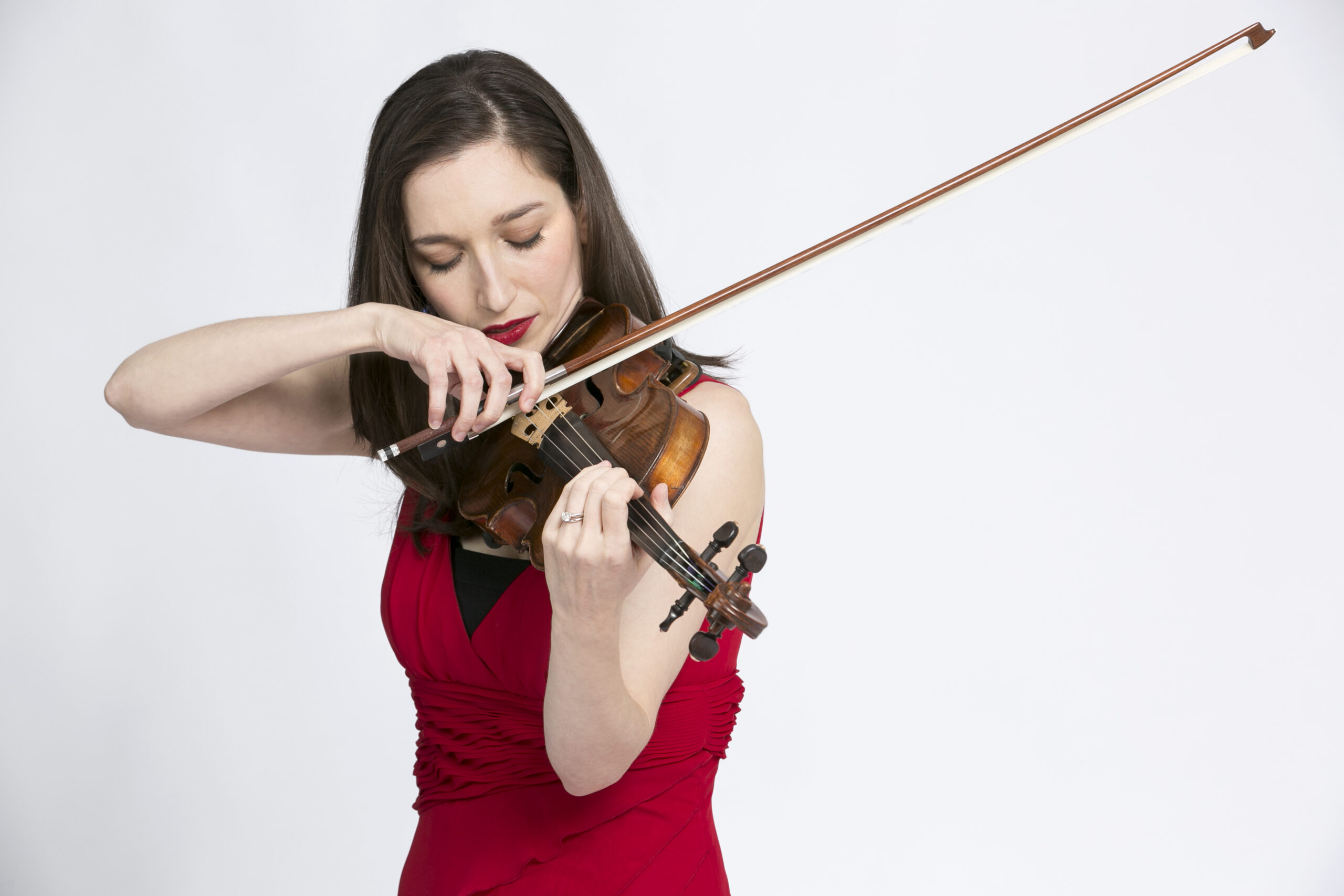 Anna Elashvili, violin (Baltimore), hailed as “riveting” by the New York Times has appeared as a soloist, chamber musician and concertmaster around the world. She has collaborated with renowned artists such as Lynn Harrell, Dawn Upshaw, Daniel Hope and Maxim Vengerov. Anna is a violinist of Decoda, an Affiliate Ensemble of Carnegie Hall. She has also performed with the Orpheus Chamber Orchestra, East Coast Chamber Orchestra, NOVUS NY, and the Mark Morris Dance Orchestra.

For seven years, she served as the first violinist of the Bryant Park Quartet. Anna received her Bachelor’s and Master’s Degrees from The Juilliard School and completed a 2-year fellowship at Carnegie’s program “Ensemble Connect”. Her international travels include concerts in England, Mexico, Germany, Canada, Israel, Iceland and Abu Dhabi among others. Ms. Elashvili is currently violin faculty at Vassar College, the Special Music School and Yellow Barn’s Young Artist Program. She has attended summer festivals including Yellow Barn, Perlman Music Program, Tanglewood and the Verbier Music Festival, where she served as concertmaster for several European tours.

Ms. Elashvili also has written arrangements for Decoda, the Bryant Park Quartet and other ensembles. She commissioned “Sonatas and Disasters” by Brad Balliett and premiered works by Valerie Coleman (commissioned for Decoda), Du Yun, Christopher Theofanidis, Julian Wachner, Nico Muhly, Richard Wilson and many others. She also enjoys collaborating with dance companies and has worked closely with the Lar Lubovitch and Mark Morris Dance Groups, Wendy Whelan and Dance Heginbotham.

Ms. Elashvili performs on a Sam Zygmuntowicz violin on a generous extended loan. 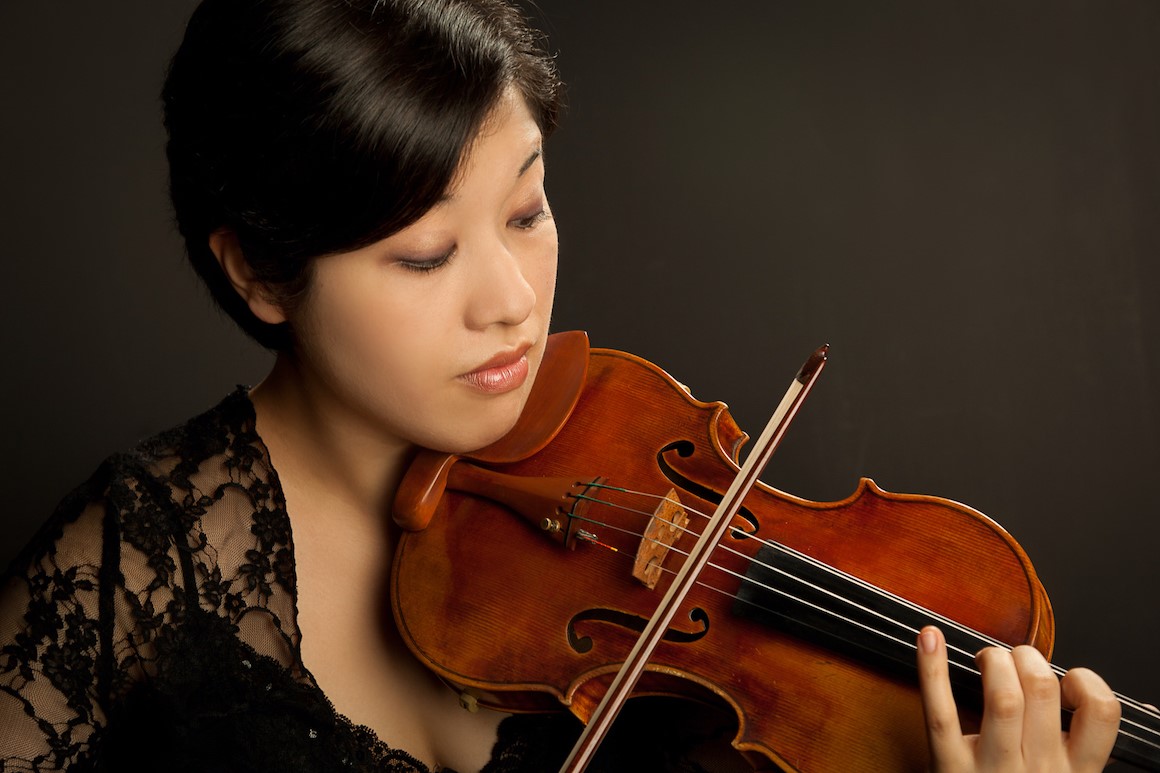 Lauded by the New York Times as a “brilliant soloist” and by Strad for her “marvellous and lyrical playing,” violinist Emilie-Anne Gendron enjoys a dynamic career based in New York City. A committed chamber musician, she is a member of the Momenta Quartet (Artists-in-Residence at Binghamton University), whose eclectic vision encompasses contemporary music of all aesthetic backgrounds alongside great music from the recent and distant past.

Ms. Gendron has been on the roster of the Marlboro Music Festival and Musicians from Marlboro since 2011, and also appears with A Far Cry, Chamber Music Society of Lincoln Center, Chamber Orchestra of Philadelphia, Orpheus, Talea Ensemble, Sejong, and IRIS Orchestra (as one of its concertmasters). She is a founding member of Ensemble Échappé, a new-music sinfonietta, and the Gamut Bach Ensemble, in residence at the Philadelphia Chamber Music Society. Her extensively varied international appearances have included festivals in Russia, Finland, Indonesia, South Korea, and Jordan; and major venues across the Americas, Europe, and Asia, in direct collaboration with such artists as Teddy Abrams, Rachel Barton Pine, Bruno Canino, Leon Fleisher, Richard Goode, Anthony McGill, Edgar Meyer, Gil Shaham, and Jörg Widmann, among many others. 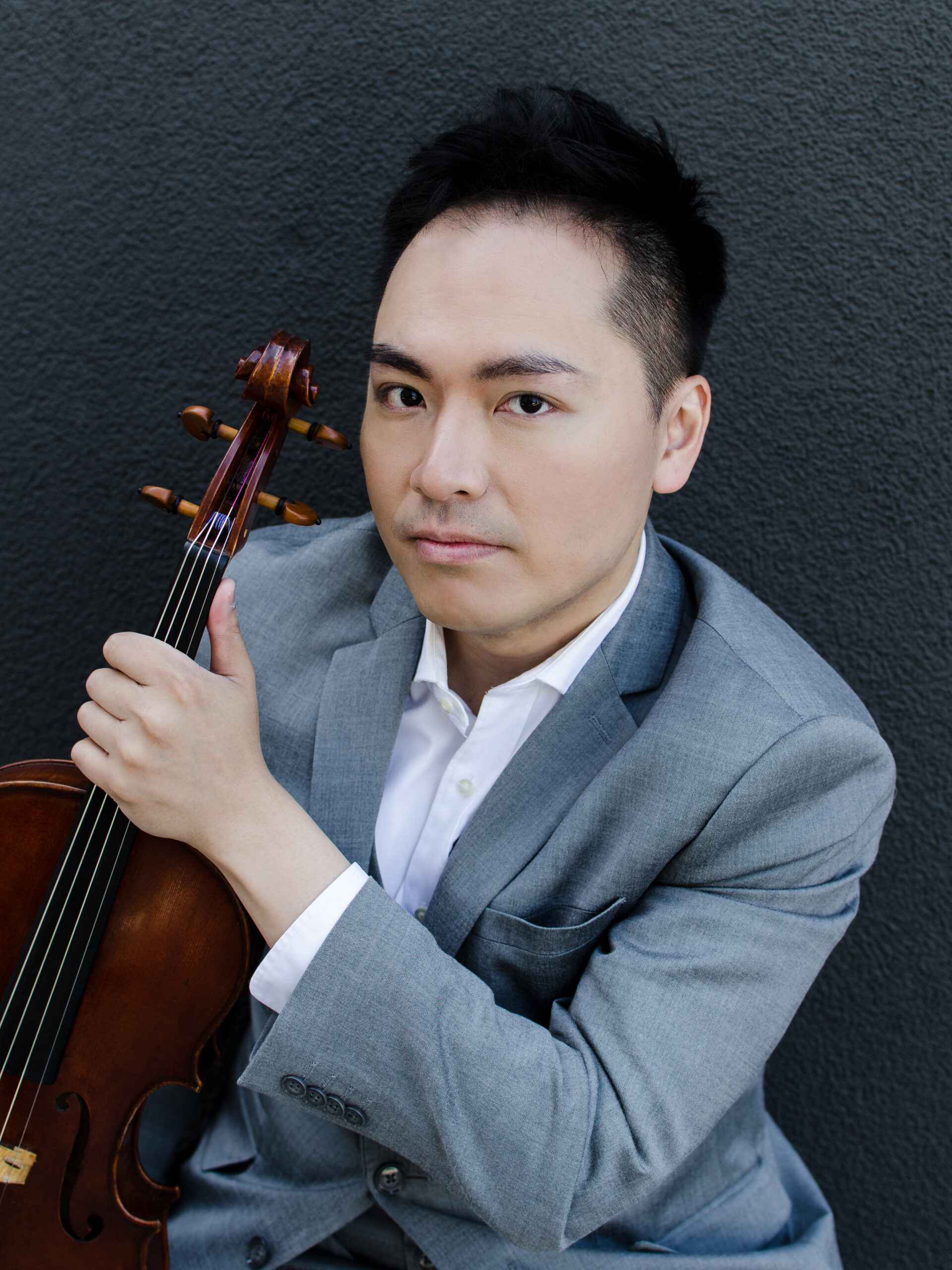 Taiwanese born violist and erhuist (Chinese violin), Wei-Yang Andy Lin, is recognized as one of the most promising and the only active performers who specialized in both western and eastern instruments.  Praised by The Strad “The great Molto adagio…..elicited some of the night’s most sensitive work, especially from Wei-Yang Andy Lin on viola.” and New York Times “Taiwanese-born violist Wei-Yang Andy Lin..…is also a virtuoso on the erhu, and he gave a brilliant performance.”

Andy is the artistic director and co-founder of the New Asia Chamber Music Society and holds his bachelor’s and master’s degrees from The Juilliard School and his Doctor’s degree in Musical Arts from SUNY Stony Brook.  He has won numerous competitions including Taiwan National Viola Competition and First Prize in the 2008 Juilliard Viola Concerto Competition. He has also appeared as a viola and/or erhu soloist with orchestras such as the Busan Metropolitan Traditional Music Orchestra, Chamber Orchestra of Philadelphia, Grant Park Symphony Orchestra, Incheon Philharmonic, the Juilliard Orchestra, Milwaukee Symphony, New York Classical Players, Orford Academy Orchestra, Solisti Ensemble and Yonkers Philharmonic Orchestra.

Andy is a founding member of the Amphion String Quartet and a member of the Musicians of Lenox Hill and serves as principal violist of the New York Classical Players and the Solisti Ensemble. He has been invited to perform chamber music with Itzhak Perlman. He has also been invited by the Metropolitan Museum to give recitals at their Gallery Concert Series and Patrons Lounge Concert, as well as a recital at the Caramoor Center for the Music and the Arts. (www.andylinviola.com)

A versatile and accomplished cellist, Sean Katsuyama is a frequent performer on New York’s concert stages and Broadway theaters and has performed solo and chamber music in many of its most noted venues. He is a founding member of the Iris Quartet, which is now entering its eleventh year of concerts. Following 9/11, he had the honor to play for workers at the World Trade Center site.

As an orchestral player he was a member of the Hong Kong Philharmonic and Pacific Music Festival Orchestras, touring Europe, Japan, and Korea. He also toured the North American continent with “Star Wars in Concert”.

Mr. Katsuyama is a graduate of The Juilliard School, where he studied with Channing Robbins and Harvey Shapiro. His early teachers include Lee Fiser in Cincinnati and Orlando Cole in Philadelphia. He is on the faculty of Bard College’s Preparatory Division and teaches classes at the Globe Institute and the Collegiate School and is regularly invited to adjudicate at the Hong Kong Schools of Music Festival.

His hobbies include the Chinese, Japanese, and Western versions of chess, photography, and golf. His instrument is a modern reproduction of the “Sleeping Beauty” Montagnana cello, formerly owned by Orlando Cole. 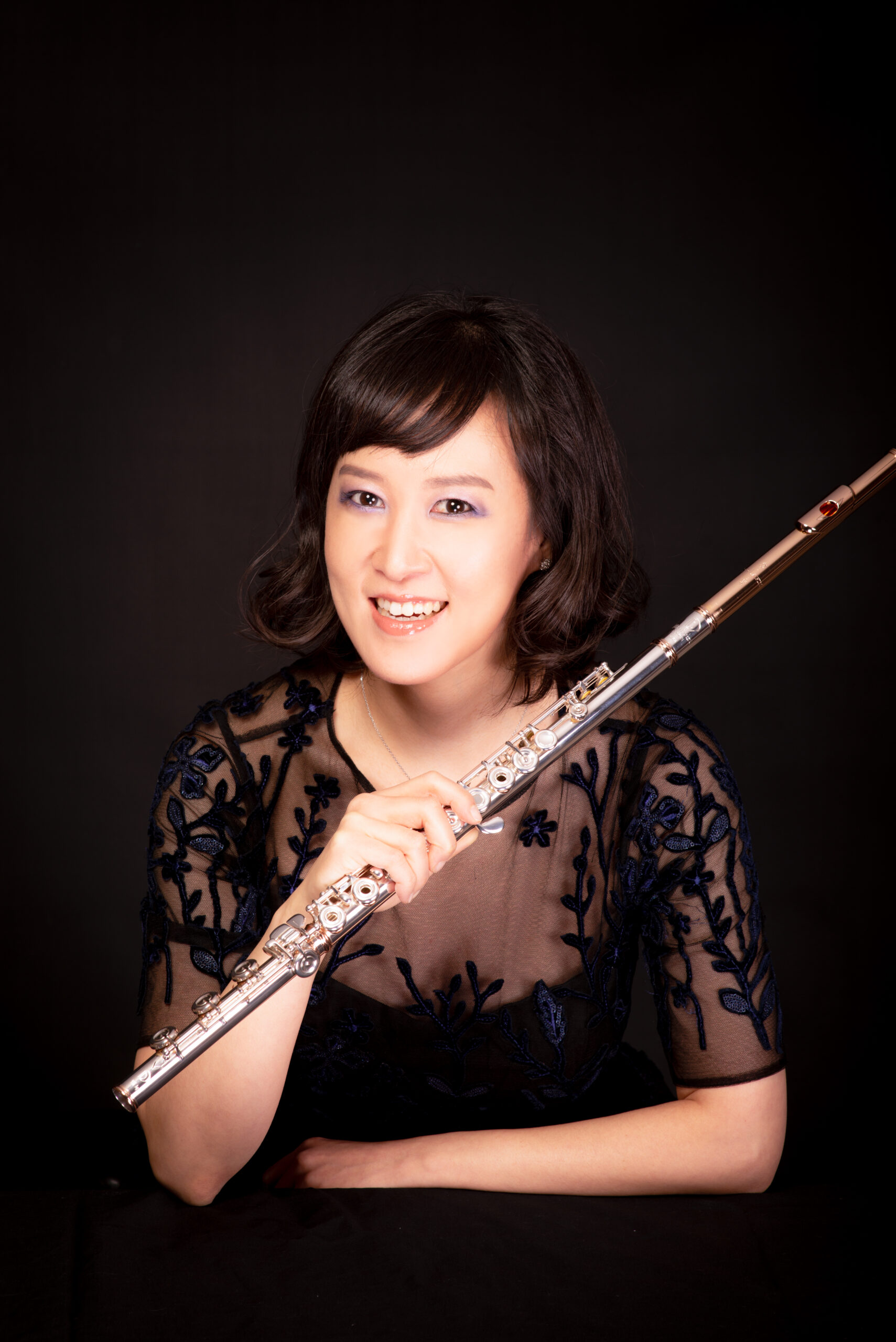 Flutist Soo-Kyung Park enjoys a multi-faceted career as an international soloist, chamber musician, artistic director, producer, and teacher. She was accepted to The Juilliard School, Pre-College Division at the age of 11, where she studied with Bonnie Lichter, and continued her studies at The Juilliard School, where she earned both Bachelor’s and Master’s degrees under the tutelage of Julius Baker and Jeanne Baxtresser.

Ms. Park has performed throughout the United States, Europe, and Asia in many of the world’s major concert halls. Past performances include guest soloist with the Amadeus Chamber Orchestra at IBK Hall in Seoul and multiple double concerto performances with Keith Underwood and Carol Wincenc in NYC.  She released her first album “Reminiscing” under the SONY Korea label in 2013.

Highly in demand as an instructor, Ms. Park is currently an Artist Professor at New York University and teaches at Manhattan School of Music, Pre-College. She also serves on the faculty of The Consummate Flutist, a masterclass series at Carnegie Mellon University. In addition to teaching, she has produced and presented numerous masterclasses and recitals by world-renowned flutists such as Jeanne Baxtresser, Julien Beaudiment, Linda Chesis, Mathieu Dufour, and Karl-Heinz Schutz.

An avid chamber musician, she is artistic director and a founding member of the Musicians of Lenox Hill, an ensemble she has led for annual performances at the Temple of Israel in NYC for two decades. She is also co-founder of NY Flutists, a professional flute ensemble based in NYC. 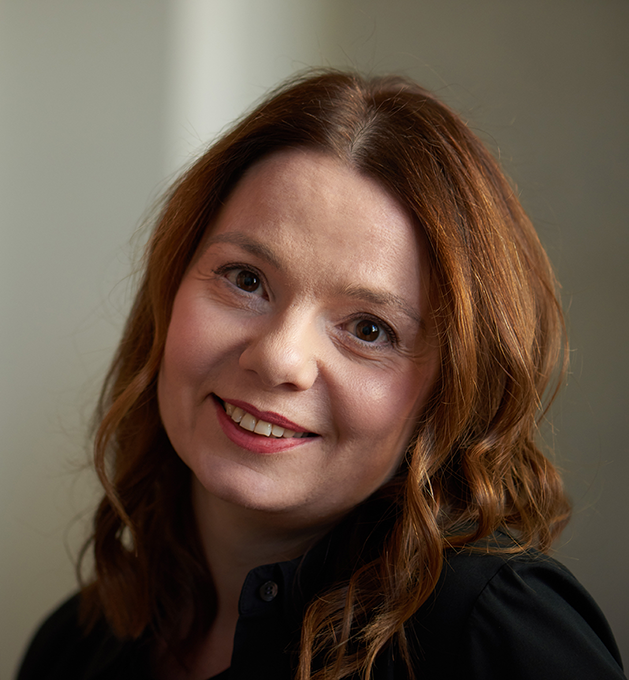 Lora Tchekoratova’s professional journey has been multifaceted. At age 21 she won first prize at the Washington International Competition for pianists where she was also awarded the audience prize and the prize for the youngest finalist. Subsequently, Ms. Tchekoratova made her debut at the Kennedy Center in Washington, DC., followed by recital appearances throughout the United States, most notably at the Phillips Collection (broadcast over WGTS-FM), Weill Recital Hall at Carnegie Hall, as well as in Alexandria, Chicago, Minneapolis, and New York.

She began her piano studies at age four and gave her first recital five years later at the State Music School in Sofia, Bulgaria. At age eighteen, she continued her studies at The Juilliard School in New York City, where she received her Bachelor’s, Master’s, and Doctor of Musical Arts degrees as a student of Seymour Lipkin. Other teachers include Lydia Kuteva, Vessela Marinova, Prof. Jenny Zaharieva, and Oxana Yablonskaya. She has made numerous recordings for Radio and Television in Bulgaria, Sweden, Finland, and the US. Her CD recordings for Gega New have been received with worldwide critical acclaim.

In recent years, in addition to performing as soloist and chamber musicians, Lora has devoted herself to teaching and mentoring of extraordinarily gifted young musician. She is a founding member of Bulgarian Concert Evenings in New York and the Artistic Director of the renowned organization Salon de Virtuosi, which provides performances and career grants to emerging young talents. She is also the chair of the Off the Beaten Path Foundation” a nonprofit organization in Bulgaria and as such organizes a summer chamber music festival in the picturesque village of Kovachevitsa in Bulgaria. Lora Tchekoratova serves on the faculty of Mannes Prep at the New School.

A. Rolla Little Duo for Violin and Viola, Op. 13

A. Rubtsov Divertimento in E for Flute and String Quartet