Temple Israel is founded as Congregation “Hand in Hand” (Yad b’Yad) in the then remote Jewish community of Harlem. The community first worships above a printing shop on East 125th Street. According to early descriptions, its founders were “people of moderate circumstances, many of them having small stores on 3rd Avenue and living behind their shops.” The founders, of German origin, were traditionally observant Jews.

Those who founded Temple Israel took their Jewish responsibilities seriously and understood the broad sweep of Jewish history. They devoted their energies and resources to ensuring that Temple Israel would become an enduring institution. One of their first acts was to establish a religious school called “The Gates of Learning” which grew as rapidly as the congregation necessitating a move to larger space on 124th Street in 1874, and yet again in 1876 to a former church on 116th Street, between 1st and 2nd Avenues.

Columbia College and Emanu-El Theological Seminary student, Maurice H. Harris is appointed as the congregation’s first permanent Rabbi. Dr. Harris, over a 48-year rabbinical career, transformed the community into a major cultural institution and became one of the most prominent spokesmen of progressive Judaism. Rabbi Harris was highly regarded as a founder of many major Reform Judaism organizations. A fearless advocate for progressive Jewish ideals, he was an early supporter of the Allies in WWI, even though most of the congregation consisted of German Jews whose loyalties were initially divided.

Dr. Harris was fortunate in having Daniel P. Hays as President during his tenure (for 33 years). Mr. Hays became one of the outstanding laymen in American Reform Jewry, President of the YMHA of New York and well-known as the president of the powerful Municipal Service Commission. During their leadership, the Temple attracted many prominent members of the Jewish community and was progressive at every level of its many activities.

Fundraising efforts such as a grand Chanukah Dress Ball held at the Harlem Casino occupied a great deal of the energies of the leadership of the congregation. An estimated 2,000 elegantly costumed guests attended the event in support of the Hebrew School of Harlem.

Inspired by the dynamism of the rapidly growing community, the congregation purchased a former church at 125th Street and 5th Avenue as the site of their first permanent home.

The congregation changes its name to Temple Israel of Harlem, and their new home at 125th Street and 5th Avenue (pictured below) is re-dedicated. 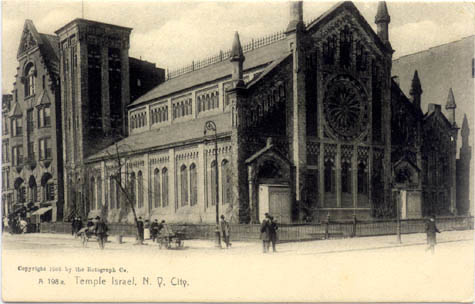 The congregation constructs its own synagogue building at the northwest corner of 120th Street and Lenox Avenue (pictured in page banner, now Mt. Olivet Baptist Church). The limestone building, designed by Arnold W. Brunner, was unique in that it did not follow the typical Moorish Revival style of other synagogues of the time.

Later, New York Times columnist David W. Dunlap would comment that the building “looks like a Roman temple until you notice the Stars of David in the column capitals, fanlights, and spandrel panels,” and “may rank as the single best Neoclassical synagogue in Manhattan.”

Temple Israel joins the Union of American Hebrew Congregations (now the Union for Reform Judaism) and a few years later merges with Shaaray Beracha, a synagogue of Alsatian Jews.

The congregation moves again to a new building at 210 West 91st Street (pictured below) designed by William Tachau – the building is dedicated in 1922. 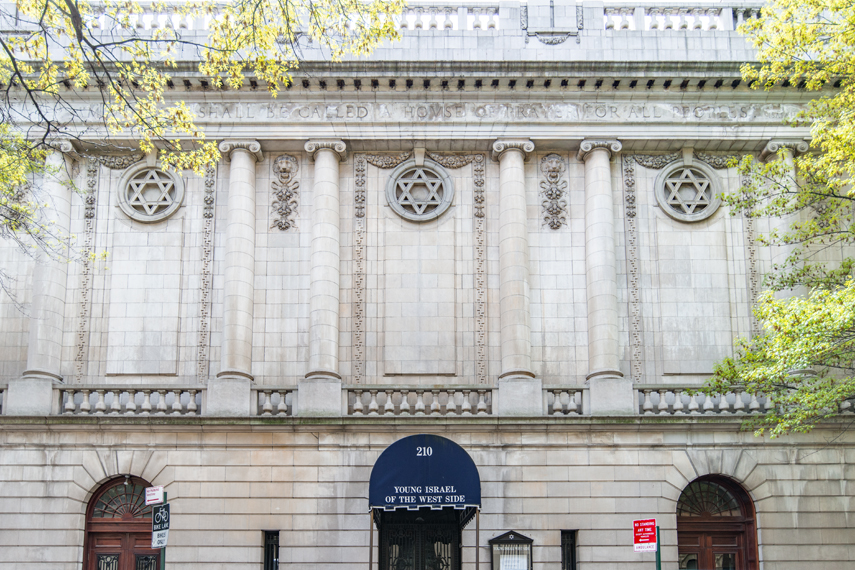 Temple of Israel of Harlem officially changes its name to Temple Israel of the City of New York.

Rabbi William F. Rosenblum is appointed Rabbi to the enormously influential West Side congregation. Although the early years of Rabbi Rosenblum’s rabbinate were in the midst of the Great Depression, such was the prestige of Temple Israel that it continued to thrive. Its many activities provided relief to those who were unfortunately affected. The next phase of Rabbi Rosenblum’s tenure was even more trying – the Second World War. These years brought into focus the mission of the congregation – to support their nation loyally as educated, concerned, and informed Jewish Americans.

The establishment of the State of Israel preoccupied the Jewish Diaspora at the end of World War II, but Rabbi Rosenblum held consistently to his world view that Jewish interests were separate from the temporal issues of governing a state. He believed that the Jewish faith transcended national divisions and could never in good conscience advocate the establishment of a Jewish State. His outspoken idealism regularly captured the interest of the New York Times. In the post War era and the latter part of his career, he became a supporter of the Jewish homeland.

Rabbi Martin Zion is tapped as as Rabbi Rosenblum’s successor. During the 60s and 70s, concerns for Soviet Jewry, support for the State of Israel during the Six Day War and Yom Kippur War, the rescue of Ethiopian Jews, and other mainstream Jewish issues soon were overwhelmed by the urgent national and secular uproar of the Civil Rights struggle and the Vietnam War. Under his leadership, Temple Israel became a welcoming home to those in interfaith marriages, and to the growing population of marginal, alienated Jews.

The trustees make the decision to relocate the synagogue from the Upper West Side to the Upper East Side of Manhattan, and begin construction of a new building at 112 East 75th Street. Designed by architect Peter Claman of Schuman & Lichtenstein, the Brutalist structure was completed in 1967.

Rabbi Judith Lewis becomes the fourth Rabbi of Temple Israel. A thoughtful, articulate intellectual, she responded to the needs of congregants with care and support and continued in the footsteps of her predecessors, while introducing the congregation to the modern egalitarian concept of female clergy.

The Jewish community was beginning to grapple with the essential character of American Jewish identity. Jews in America had entered an extraordinarily secure and successful period in their history and in broader American society. The threats to our existence were no longer external, but internal, as assimilation and secularization had become contemporary challenges. While perhaps half of the Jewish community had strengthened its commitments, many others appeared passive or disaffected. At the same time, radically conservative and even fundamentalist forces had grown within some quarters of the Jewish world, as they had in many other religious groups, in society and in politics at large. Temple Israel found itself at a crossroads in the early 21st century.

Rabbi David J. Gelfand becomes only the 5th Rabbi in the congregation’s history. He has brought a deeper spirituality and connection to Torah and lifelong Jewish learning. This is reflected in 350 of our families sharing in the writing of a new Torah scroll early in his tenure, enhanced educational and cultural programming, and increased membership in our inclusive, pluralistic community. With extraordinary clergy colleagues, he has strengthened our commitment to the prophetic call of social justice – tikkun olam (repairing the world) – and being a global citizen.

Temple Israel fosters an appreciation for the warmth of tradition, passion for Israel, and connection to world Jewry. The congregation continues its commitment to outreach and inclusion as it strives to not only learn Torah, but “Be Torah.”

The doors and hearts of our clergy, educators, and staff are open to each and every member and to all who seek them out. Temple Israel is proud to be a leader in defining a modern American Judaism which preserves the integrity and continuity of our tradition, even as it addresses the challenges of the next generation.